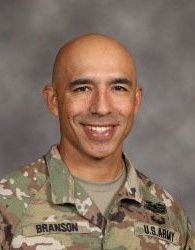 Lieutenant Colonel Jesse J Branson comes to the Utah Military Academy at the end of his military career in the Army as a Military Intelligence Officer. During his career in the Army, he served in various locations around the world including, Alaska, New York, Arizona, Indiana as well as combat deployments to Iraq and Afghanistan.

He earned his Masters of Science in Kinesiology with an Applied Sports Science Emphasis from Indiana University in preparation for his tenure as an Associate Professor in the Department of Physical Education at the U.S. Military Academy at West Point.

LTC Branson has a passion for education, mentoring and building relationships with students and believes that there are a multitude of life lessons that can be learned through sports.

LTC Branson is thrilled to be a part of the team at the Utah Military Academy and excited to contribute to the success of the Academy now and in the future.