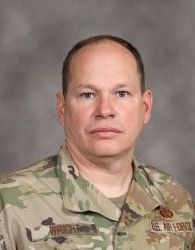 Major Chad R. Wright is a Junior ROTC instructor and history teacher at Utah Military Academy, Riverdale, Utah. Major Wright enlisted in the Air Force in 1995 serving as a medical laboratory technician. After completing ROTC at Brigham Young University he commissioned in the Air Force in December, 1999 as a manpower officer. Major Wright has served as an operations branch chief, chief of manpower and organization, section commander, flight commander, and deputy squadron commander. He has deployed three times to Kyrgyzstan, Iraq, and Kuwait. He retired from active duty at the Pentagon on 1 November, 2013.

Major Wright has been married 20 years to his wife Connie. They have five children, Richard, Jessica, Samuel, Kaylynn, and Daniel.