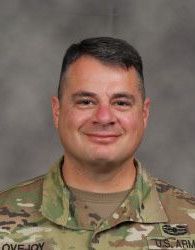 Major Lovejoy spent ten years of his youth in Utah.  He attended North Ogden Junior High School and Ben Lomond High School where he was the JROTC Cadet Battalion Commander, a representative to Boy’s State, and captain of the wrestling team.  He later attended Weber State University on an Army ROTC scholarship. After his retirement from the Army in 2015 he decided to move back to Utah and pursue a career in teaching.

This is Major Lovejoy’s forth year at Utah Military Academy.  Beyond his love of teaching and learning he enjoys coaching wrestling, mentoring cadets, hiking, fitness, reading history, and raising his two daughters; Zofia and Veronika.