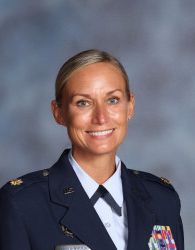 Major Susan H. Gardenhour is a Junior ROTC instructor at Utah Military Academy, Riverdale, Utah. Major Gardenhour enlisted in the Air Force in July 1992 serving as a logistics technician until 1998 when she was selected for duty with the Air Force Office of Special Investigations (AFOSI) as a Federal Agent. After completing ROTC at the University of Maryland she commissioned in the Air Force in December 2002 and continued duty with AFOSI. Major Gardenhour has served as a branch chief, operations officer and detachment commander on numerous occasions. She has deployed multiple times, serving in Iraq, Afghanistan, Qatar and Kuwait. She retired from active duty on 1 August 2015, after 23 years of service.

Major Gardenhour is married to Lt Col (Retired) Joseph Gardenhour and they have two children, Conner and Carley.